My friend David the Irish is now working in Oz, send us is Ninja story in Jakarta, Thank David

I grabbed a flight from Kota Kinabulu in Borneo to Jakarta and arrived in Jakarta at about 1.30 in the morning . On the flight over I had read in the Lonely Planet that the only taxi company to trust was Bluebird and that I should book them from the arrivals terminal as soon as I arrived because the rest of the companies are a bit dodgy. I did just that and went to Bluebird. They wanted $20 to take me into the city, and being the tight backpacker that I am, I decided that it was too expensive and decided to bargain with a taxi driver outside.

So off I went and bargained down the fare of the ride to $9 which I thought was a pretty good deal. Even though I thought he looked a bit dodgy! But I had my head screwed on. It was a mini-van so I checked the trunk to see if there was anyone was hiding in there who would jump out during the journey and rob me. Perfect no one there! Next the driver told me to put my bag in the trunk I said no and kept it with me in the back seat along with my day pack with all my valuables like passport, laptop and my third camera of the trip!!

The guy wanted me to pay upfront but I told him, “Not until you get me to where I want to go then I will pay!! “ So off we went. I did have a feeling that something was going to happen. I thought about it and reckoned he was a small guy; maybe 5ft two at the most. With this, I thought if he tried anything I could take him unless he had a gun of course.

So off we went on our merry way on our 40- min journey as he told me it would take that long to get to the city centre. First things first I asked him if I could smoke; this was my cunning plan to attract attention if anything happened as I had to keep the window open!.

So we are cruising along the freeway into the city and the driver was acting kind of shifty by asking me loads of questions about my job at home, how much money I earned, what was my budget etc. Of course I told him a bunch of lies saying that I was really a poor backpacker and all that. While we were talking I decided it would be a good idea to start hiding some of my possessions like my credit card and passport ( It is really hard for Irish to replace passports in Indonesia as the nearest embassy consulate is in Vietnam)Hence there was no way I was going to give that up without a fight. The only place I knew he wouldn’t look would be in my boxers so down they went next to the family jewels.

It was at about 2.30am when he pulled over to the side of the freeway pretending that there was something wrong with the car. He got out and opened the hood. In my head, I was thinking, “Here we go , if something is going to happen it’s going to happen now!!” At this moment, he came to the window and asked me to hold a torch for him. I agreed and went out leaving the passenger door open while slinging my day pack with all my valuables over one shoulder . As I was holding the torch for this taxi driver on the side of the motorway (which was very quiet by the way) , he suddenly turned around holding a knife with maybe a 15cm blade and said , “I’m very sorry mister but I need your wallet, all your cash and your passport.” Now, to say I was in shock was an understatement. I started rambling trying to buy some time to think (even though I was expecting this). I told him that there was no need for this and I could pay him extra. He was not bought over and told me to stop wasting his time. As he said this he stepped closer to me, I panicked and swung my bag from my shoulder and knocked him right into the side of his head. He fell to the ground and the knife flew into the grass verge. I kicked the knife away and started kicking the car and shouting at him ,telling him to stay where he was or I would kick him again (I went a bit crazy!!!! But I felt it was warranted!)

I was shouting at him to stay put and at the same time I grabbed my rucksack from the passenger seat. Simultaneously, he stood up and got back into the car shouting at me telling me he was going to have ME arrested!! Some cheek! Then he took off driving!

So there I was on the side of the freeway at 2.45am with no taxi. And guess what happened? It started to rain! With a sigh, I thought to myself “Welcome to Indonesia”.

Eventually after trying to flag down cars and taxis this really nice Indonesian guy stopped and asked me what I was doing on the side of the freeway at this hour of the morning. I recounted my story to him and he immediately offered to take me into the city (such a nice guy). Along the journey he asked me where I was staying and me being a backpacker, I didn’t have anywhere booked. I was just going to rock up to Jl Jaksa in the backpacker area and find somewhere to stay. He told me I was crazy. So we got to JL. Jaksa and he told me to wait in the car while he went to find me somewhere to stay. He went from door to door and came back about ten minutes later saying he had found me somewhere but it was expensive, it cost 15 dollars a night !!!! After my ordeal I said that it was an excellent deal. The place turned out to be fantastic; my own big double room, TV, wireless internet, big bath and a balcony. 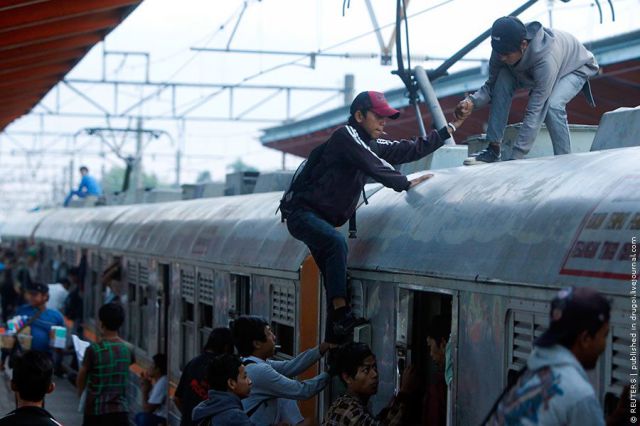 After I checked in and had a beer , I wanted to check my emails and tell my friends my story , so I plugged in the laptop tried turning it on but … nothing happened – I broke my new laptop on the head of an Indonesian taxi driver!!!!!

Next morning I booked a flight to Bali and got the hell out of dodge and vowed never to return to Jakarta again!!!!!! Well that’s my story about Indonesian taxi drivers and the moral of the story is always and I mean always use Blue bird taxis in Jakarta unless u have a backpack with a laptop in it to use as a weapon!!!!!!

Safety Tips for Traveling by Taxi in Indonesia

Jakarta is one of the busiest cities in the world. it is the capital and largest city of Indonesia, located on the northwest of the island of Java. Jakarta is a huge city with several districts containing sightseeing, restaurant, nightlife and accommodation.

The Indonesian national are United in their Diversity that remains one of the greatest attractions of Indonesia. There are some 300 ethnic groups, a result of both the country’s unique geography and history. Many Indonesians may see themselves first by their ethnic and cultural group and secondly as Indonesians. Balinese the national language and Pancasila are the glue and the national philosophy. The doctrine of unity and universal justice for all Indonesians try to take the lead.

The majority of Indonesians are of Malay extraction. Lot of them are “pribumi” (natives) or Melanesian (in Papua-Irian Jaya and the eastern islands). There are ethnic Chinese, Indians and Arabs concentrated mostly in urban areas throughout the archipelago. Major Ethnic groups: Javanese – 45%, Sundanese – 14%, Madurese – 7.5%, Coastal Malays – 7.5%, and others – 26%.

228,248,538 million (2008-World Bank). Indonesia is the fourth most populous nation in the world after China, India and the United States. Over two thirds of the population reside in Java, the centre of the country’s economic and political power. There were 39 million people living below the national poverty line in 2006. This number increases to 116 Million if the poverty line is set at US$2 day.

Population problems centre mostly around the issue of density. Together with the adjoining smaller islands of Madura and Bali, Java accounts for just over 7% of the Indonesia land area, but these islands are populated by some 119 million inhabitants which comprises 59.5% of the total Indonesian population. By contrast, Papua (formerly Irian Jaya) represents 22% of the total land mass, yet has only 1% of the population. So vast areas of Indonesia have very low population levels … while the majority of the people live in the island of Java and Bali.

About 88% of the population is Muslim. Roughly 10% is Christian (Protestant and Roman Catholic)c and approximately 2% is Hindu and Buddhist.

Jakarta’s nickname among expats is the Big Durian, and like its fruit namesake it’s a shock at first sight (and smell): a sweltering, steaming, heaving mass of some 10 million people packed into a vast urban sprawl. The contrast between the obscene wealth of Indonesia’s elite and the appalling poverty of the urban poor is incredible, with tinted-window BMWs turning left at the supermall with its Gucci shop, into muddy lanes full of begging street urchins and corrugated iron shacks. The city’s traffic is in perpetual gridlock, and its polluted air is matched only by the smells of burning garbage and open sewers, and safety is a concern especially at night. There are few sights to speak of and most visitors transit through Jakarta as quickly as possible. Cinema: Movie theatres are a more affordable escape at around Rp50,000 for a plush seat in any of the capital’s shopping malls. Beware of the heavy hand of the Indonesian censor though. The price of popcorn, drinks are exorbitant.

Golf: Golf is the number one pastime of the upper classes and, as so many other things here, relatively cheap by Western standards. Green fees can go as low as Rp60,000 on weekdays

Bowling: Most alleys are found in shopping malls. The fee for a game is US$ 2.00 to US$ 3.00. Guest can rent bowling shoes etc.

Football: It is not advisable to watch any live football match in Jakarta, because the Jakmania, Persija Jakarta’s ultras often turn into riot.

To find more things to do visit [www.whatsnewjakarta.com].

Karaoke: One of the main entertainment programs in Asia. With the most popular chains spread throughout Jakarta. Expect to pay as low as Rp60.000 per hour plus tax for 6-person room.

Jakarta may be the capital of the world’s largest Islamic country, but it has underground life of its own. If you’re the clubbing type, its nightlife is arguably among the best in Asia. From the upscale X-Lounge to the seediest discos like Stadium, Jakarta caters to all kinds of clubbers, but bring a friend if you decide to brave the seedier joints (though they tend to have the best DJs). Fans of live music, on the other hand, are largely out of luck if they go to budget bars, at least unless they’re into Indonesian pop.

When out and about, note that Jakarta has a fairly high number of prostitutes, known in local parlance as ayam (lit. “chicken”), so much so that much of the female clientele of some respectable bars (operated by five-star hotels, etc) is on the take.