Time passed quickly despite the slow and relaxing life in Asia . Six months of travel just went by in the blink of an eye. It’s time for heartbreaking farewells to all the staff, Shampoo, Dima and my new love Pearlyn give me one last kiss or a hug before the big departure. It’s amazing how in one month or even a week , you can become close to people who were total strangers before.

My new friends escorted me to the bus station in a truck. Dima asked to see my passport. He hid it and said, “No, Bobby, Bobby you stay here with us.” Hey! don’t be stupid I don’t want to miss my plane. Tricky, this hairless Russian.

I was going to buy my bus ticket, but unfortunately the VIP bus was full. I had to take the next public bus which stops in several villages and sometimes takes two hours longer. I was going to experience Lao until the very end. Shampoo immediately thought,” We got one hour before your departure. Come drink beer at the Vietnamese bar in front of us.” Lanterns, pig roasting on charcoal on the sidewalk and karaoke confirmed the heritage of its owners.

An hour of relief has split mouth, saw Dima’s frenzied dance and drank my last Beerlao. They left me at the bus station, but it seemed that the public bus would not leave just yet because there is a minimum number of passengers required. My companions wished me good luck with promises to meet again and disappeared into the dark and warm streets of Luang Prabang. I was looking for a solution to my problem when I met a French and his Lao girlfriend in the same shit as I am. I stopped a bus coming from the north. It had empty seats hallelujah we are saved.

– The bus was going at full throttle and it took a little over eight hours much better than the usual 12 hours.

– Arrived in Vientiane, I walked away and took a tuk tuk.

-He picked up other passengers and went around the city. Once at my brother’s great house the driver didn’t want to lower his price.

– I stayed with my brother, his wife, family and children for a few hours.

– Tired and exhausted from the uncomfortable bus trip ,I tried to sleep but I was too nervous.

– we watched news from Canada on the television , it seemed to be experiencing a heatwave, two days of 30 degrees and it caused general hysteria. 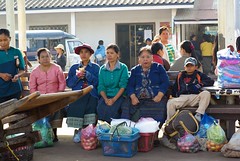 – they gave advice on how to survive in this temperature. Truly a society leveled from the bottom and governed by fear.

– My brother took me to the bus stop near the morning market in Vientiane. All the the tuktuk drivers ,seeing my big backpack,  asked and seeked with enthusiasm.

– I bade goodbye to my brother. I would take the bus, at least I know the price I would pay.

– I realized once seated in the bus that I was not in the right one. I got off at full speed however my bag was stuck at the bottom of the baggage compartment.

– We arrived at Lao border, waiting for my luggage, but this time it remained there until all people had crossed the border

– I wanted to exchange my kip into baht or USD at Lao bank exchange before leaving the country because I could not do anything with it after, but fellow passengers quickly moved to the customs office. I didn’t want to miss the bus and lose my bag.

– The customs officer looked at my passport and my famous liquid paper, left his cabin to the control office. He came back and finally stamped my visa and let me go … It was freaking hot!

– This is the first and the last time someone applied some liquid paper in my passport because next time they will slap me with a fine or worse, a jail sentence.

– I finally changed my kips to baht quickly.

– The bus crossed the Thai border, this time it went very quickly.

– Is the first time I saw a luggage search in Thailand, but only for the Thais, probably other consequences of red shirts action.

– We waited in the bus, not obvious to gather 90 people after two passport control and two border crossings 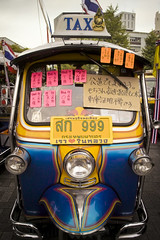 – The minutes flew, I lost my patience, I had just over an hour to get to the train station and buy my ticket. I don’t want to miss it or spend the night sitting on a narrow wooden bench.

– Everybody returned to their seats, we set off, but unfortunately it was the peak of rush hour through a road under construction. why all these obstacles?

– I arrived at the station jump in a jumbo. Quickly to the train station please!

– The driver laughed at me: why come all the way to Nong Khai when the station is just beside the border. You’ve come all this way for nothing. Yes, my mistake, I should have requesed a ticket for the friendship bridge and taken a taxi from the Thai border. It’s much quicker and does not expect others to return border posts.

– There are only available seats in air-conditioned sleeping cars for 570 baht or about $ 20 no problem!
Train timetables and tariff of Thailand

– Some nice people are sitting next to me ;an Irish ,who has been teaching English in Bangkok for 7 years, and his Thai girlfriend.

– Drank a few beers which were bought at the station market before our departure.

– Curiously, this time there are no itinerant vendor who offers us water, Pepsi or even good beer.

– Military patrols constantly move in the car checking the passengers, I noticed that the doors are closed between each car another compliments of the red shirt I guess.

– We went to the dining car where smoking is allowed in contrast to the rest of the train.

– Police and soldiers out of the back of the car and seemed somewhat messed up by alcohol.

– A little later. The Irishman was drunk and he fell to the floor of the car. It was not so easy to help him up.  He told me to pay the bill and he would return the money to me later. I paid, albeit  complaining a little.

– Later last bill arrived and it was a bit expensive, Irish said it’s OK but I said don’t worry. I argued, but they threatened to call the police. I paid and we went into our wagon far away.

– The Irish insisted on finishing his beer. I drop it into the sink and  said, “Not really, you don’t need anymore.Is enough ….”

– I woke up in the morning and the train is now in the eternal suburbs of Bangkok, The Irish was gone quickly without returning my money or inviting me home like he said he was at the restaurant … a bit of a  moron … to be continued