Are there any Rock concerts and active music scenes out there? Yes there is a great one in Singapore! There are some brilliant bands that come to play in and around Asia, and I have seen many since my arrival in 2010.

Here are just a few for example::

Here is a quick review of the Singapore music scene

LAMC Production is the most active local company who produce rock and heavy concerts at (http://www.lamcproductions.com ). They provide a service for tour/alternative bands across Southeast Asia. From the Philippines through Jakarta in Indonesia, and Bangkok, they are feeding the ears of all the rockers in our neighboring countries. Ticket prices are comparable to those found in the rest of the world and cost around 50- 150 USD depending on the artists and the seats you book The SISTIC ticket network – (http://www.sistic.com.sg) are the official box office of Singapore.

There is also ‘Scape’ the youth organization (http://www.scape.com.sg/) which provides more accessible shows for all ages and places to play for local and unknown talents. Oh – and there are a few bars that are worth a mention that have live entertainment such as the Wala Wala Cafe Bar in the Holland Village. You can view the list of these bars and others on CNNGO http://www.cnngo .com/singapore/play/live-music-singapore-527987. If you want more info, where to go see live acts, check them out here: 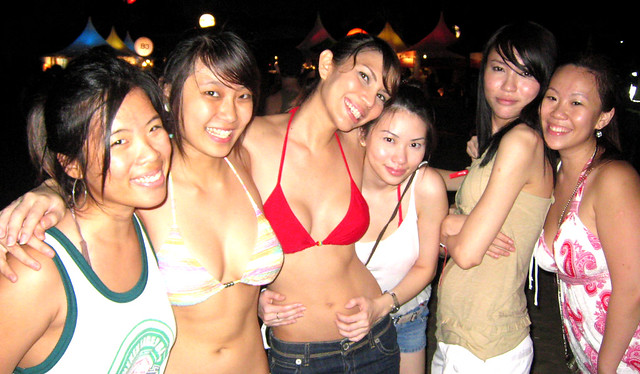 The electronic scene is also very active with the all-star trendy clubs such as ‘Zouk’ which presents internationally renowned DJ’s on a regular basis. There is also the ‘ZoukOut’ (http://www.zoukout.com/) – a festival of electronic dance music which celebrated its 10th anniversary this year. There were some big names on the list such as the Dutch DJ ‘Tiesto’ and the glamor French DJ ‘David Guetta’ and many other great DJ’s. I have always been active in the independent scene in Canada. Sometimes this has been as a journalist, producer, editor, or publisher, but more often as a fan of great music. I never really participated in the music scene in Asia and have noticed that the Laotian rock scene doesn’t really exist there.

However – I was really amazed and excited to see on Facebook – that one of my childhood idols John Kastner from (Asexuals, Doughboys, All System Go!) was coming to town with the legendary band ‘The Jesus and Mary Chain’ on May 26th last year! I offered to help complete the guest-list for the group. I realized that they would jump at the opportunity for my offer of help as they obviously would not have had tons of friends in the area. After-all it was their only show in Southeast Asia – just after their visit in Hong Kong.

’The Jesus And Mary Chain’ is a British cult group formed in 1984 near Glasgow. They dissolved in 1999, but reformed in 2007 for the Coachella festival. Their ‘fans’ have really enjoyed and the chemistry of the group at the Rendezvous. They have been on tour ever since and they are currently working on new material. At last – my friends I get to see some rock in Singapore! John warned me in advance, he says – “this is an early show, 19:30 sharp, and don’t be late”. I leave my home with one hour to spare. I finally arrive at the station, despite the directions – it’s not at all easy to get there. After getting off the train I dash across several shopping centers, through and underground tunnels. It’s amazing how you can get lost down-town Singapore but not surprising with such a mega shopping mall of a town. Finally I arrive at the Esplanade Concert Hall, a surprising construction, shaped like a Durian building. Luckily this end of town smells fresher, newer; part of the new Singapore ultra-modern look. I try to find the room but I’m a bit lost. I gaze up at the architecture which looks a bit like a museum. And the ambiance and the crowd feels a bit more like a symphony audience than fans you would expect to find at a Jesus and Mary Chain concert!

Finally – the security waved me over, I grabbed my ticket and quickly head over to the bar. “A beer please” I said, in a relieved voice. I think it cost around $ 10 or maybe even $ 15? I don’t really remember, but it was a glamorous looking bar and not the typical bars you would expect to find at a rock venue. It was more of a champagne or wine bar, and with a lucrative selection of expensive liqueur, I’ll bet.

I gaze around, the crowd is a mixture of old and new fans and with many an expat that came out the evil by the rock. During my second beer, I sparked up a conversation with another spectator. He told me that he has come to see the show from Bangkok, and also to see one of his friends working on the show, which incidentally turns out to be John Kastner! “Me Too” I said in surprise, and we both burst out laughing for a minute. A message then blurted out through the speakers, just like you get at the airport, informing us that the show was about to begin.

We entered the temple where you would normally enjoy classical music, where there is no smoke, no smell of marijuana and no drink! It’ll be rock like hell here … I thought to myself, sarcastically. The show starts, the crowd is polite, but reacts positively. JAMC gives a great performance. I did not see them as a group who just made a comeback to make their mark for the last time before it’s too late, but a group that had come back fresh with raw energy. The sound is great, just strong enough, a sweet popish British sound, complimented by this huge abrasive distorted guitar.

The crowd was enthusiastic, but calm, just as if it were the crowd of a professional golf tournament. The band returned for an encore, the crowd and the band put all their emotions into the final round of gentle rock and raw energy. We couldn’t even hear the last note, as the neon lights came on at full capacity. No one appeared disappointed. “What it’s over, it’s 21. PM and everybody is going home!” I thought to myself. It’s quite late hehe… a crowd-warmer would not even have started in America. Well, I decided to get myself another beer and forget about it but the bar was closed. We got a beer for 10$ (and without tips, and at that price, didn’t want to spill a drop) from another bar. There was hardly enough time to finish it … and they kicked us out!

Nofx on Drugs in Singapore

This info is a reminder of the time when I saw a video of the Punk-Rock band ‘NOFX’ in Singapore, how they were pretty high on a weird substance. (I believe it was called Green Dragon?) This is an odd situation really – because here we talk about dishing out the Death Penalty to drug traffickers! Also – there is supposed to be a high ratio of millionaires in Singapore. But who said that millionaires don’t’ do the ‘party, sex, drugs and rock’n roll’ scene? Surely there must be some places where the rich meet Snow White! Anyway, I’m not a millionaire, and I wouldn’t have the VIP card of that select group. EVER! No problem. . . Let’s have a drink instead lol.

We both receive an SMS from John. Meet us at the Hotel! It states. We flag down a taxi and my sidekick says skeptically ‘Ooh I don’t know when John will be there? But as we entered the hotel lobby, there he is, standing there, ready to greet us!

We make our way over to the bar, and all the band members and technicians were there. It was great to chat about Indie Rock and what goes on underground with people who understand you sometimes. We even had a Singapore Sling festival. It’s pretty good, in fact a little bit too good.

Method – Put the grenadine in the bottom of the glass filled with ice. Add gin with equal parts of sweet and sour soda, add the cherry brandy, do not stir, and add a cherry. ENJOY! We managed to empty out all the ingredients to make the best Singapore Sling of the Hotel just like real big dirty rockers! I had a blast of an evening despite the good boy attitude of Singapore scene. It was great fun.

Long live – Rock, Jesus and Mary Chain, and the Rock Shows of Singapore and Southeast Asia.