Finally budget flights have begun to be implement in the real country of thousands of elephants. Since May, Air Asia adds flights to Laos to its schedule.

Laos is a country I love; the people are friendly, stress is nonexistent, temples and Buddhist influence is everywhere. The countryside is easily accessible and rice fields can be found only 10 minutes from the city. Even the capital is not more crowded than many suburbs of the world. People are friendly and the Beerlao is excellent, what can I ask more.

Up to recently it was expensive to fly from Bangkok to Vientiane or too tedious to take an overnight train from Bangkok to Nong Khai and then cross the Friendship Bridge in the morning to enter the country. It’s not expensive, but it is unpleasant when you’re pressed for time and you want to see many countries within a one month trip.

For a while the only airline flying to Laos was Lao Airline and Vietnam Airline through an exchange with a company from another communist country. Oh yeah almost forgot, on paper these two countries are still considered part of the hammer and the anvil. Today they are more capitalist and corrupt than many other countries.

One of the rules for flying to Laos is that the airline must fly non-stop from his headquarters to Laos. So the possibility of flights is rather restricted by protectionism in favor of local companies such as Lao Airline since long time.

In short we can only fly to Laos on companies leaving from their home base. That does not help at all to find reasonable rates and dates if you are restricted by dates. Until now the only acceptable solution was to visit the Bangkok airport and pay 200USD for one way to Vientiane. Or enter from China and Vietnam for those who were travelling a comprehensive round of Southeast Asia.

Air Asia doubles its flights frequency to Laos from Kuala Lumpur starting May 27, 2012. Flights increases from 3 times a week (Tuesday, Thursday and Saturday) to 7 days on 7. 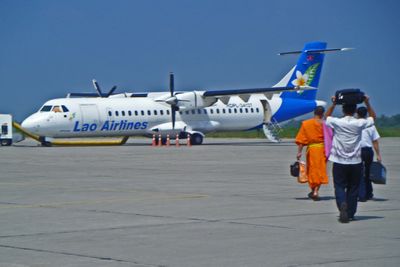 It is beginning its new flights with special rates between 17 and 62 USD dollars each way. This rate is just applicable to the new flights on the Monday, Wednesday, Friday and Sunday. You have until May 27 to take advantage of its promotional rates. Kuala Lumpur is one of the cheapest flights available from most international airports.

The price is more than interesting and I hope there will be enough passengers to continue its frequency for a long time. For example I can make an affordable flight from Singapore instead of a ridiculous 832.40 USD by Lao Airline from Singapore to Laos. I could hop on a flight to Kuala Lumpur for about $ 40 on Jet Star, Air Asia or Tiger Airways and then continue with a flight by Air Asia to Laos for a total price of around 100 USD each way which is quite reasonable in time and money invested.

http://www.laos-airtickets.com
For those with more time and less money, there are trains and buses, but it will cost you a full day and one night to Luang Prabang. If you are on tight schedule or snug in time, budget flights to Laos are your saviour.